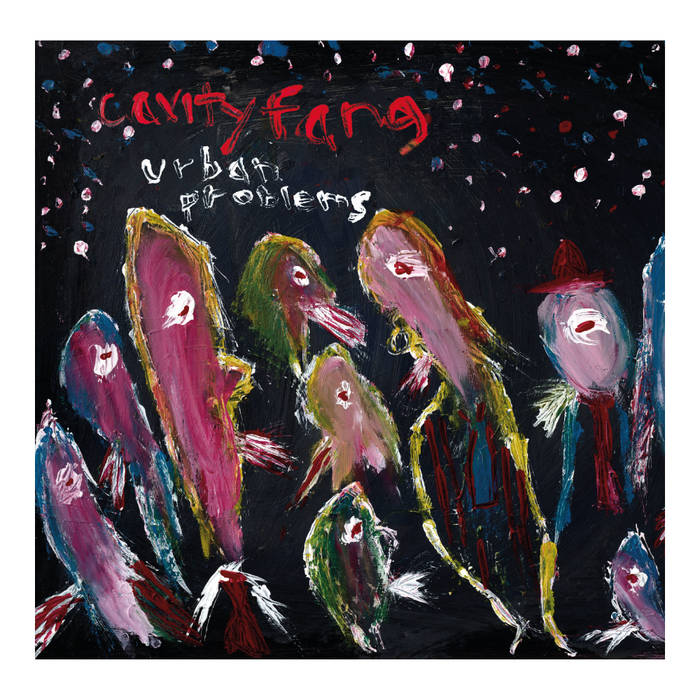 ddb A Fresh Taste of music for you ears. Love it.

Blake Hilliard Average Shopper makes me want to shout more expletives per second than anything I've heard in a while. Favorite track: Average Shopper.

CavityFang was dreamed into creation by keyboardist/composer Michael Coleman. While onstage at the Hollywood Bowl backing the experimental pop group tUnE-yArDs along with three exceptional drummers, Jordan Glenn, Hamir Atwal, and Sam Ospovat, Coleman had a revelation. He saw that by combining the musical power of these three he could create a truly demented jazz sound never before heard by human ears. Upon returning to Oakland, Coleman locked himself in the studio and composed the CavityFang suite. The pieces were conceived in the order they are played and take the listener on a sonic journey exploring the multifarious functions of the drumset and an array of musical traditions. If listened to carefully, one can hear the influence of Free Jazz, Captain Beefheart, Haitian carnival music, Jimi Hendrix, and Ligeti as well as Coleman's own distinct musical language developed through work with his trio, Beep, and his quartet, Arts & Sciences.

Along with Coleman (on vintage synthesizers and organs), Glenn, Atwal, and Ospovat (on vibraphone, drums, and percussion), the group is rounded out by virtuosic guitarist Ava Mendoza and the inimitable Cory Wright on baritone saxophone. The members of CavityFang are all active in the Bay Area music scene, both leading groups and performing as sidemen. Collectively, they've played and toured with Fred Frith, Angelica Sanchez, Greg Osby, Vinny Golia, Mike Watt, Nels Cline, and Chris Cohen.

Urban Problems utilizes sound and instrumental structures that are completely unlike the traditional jazz, pop, or rock that are so commonly found in today’s music while being accessible to any and every ear. The harmonies are simple yet riveting, and the beats, such as those on “Prelude to Rara” and “Rara” make one’s head bob uncontrollably.

Recorded and mixed by Eli Crews at Tiny Telephone and New, Improved Recording.

Thanks to all the good people at Table & Chairs and the citizens and wildlife of Oakland, CA for helping me think up this music.

Check out this sweet video by Jordan Glenn for the song "Dreamzzz"
www.youtube.com/watch?v=Cor04bjyqEk

Bandcamp Daily  your guide to the world of Bandcamp

Serena Cherry debuts her black metal project, plus a Pick from the Crypt block from Svalbard